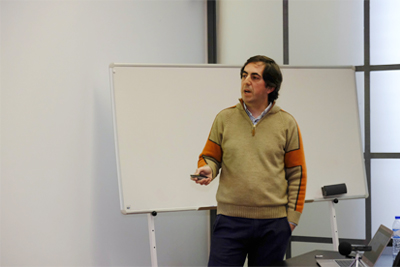 Pedro M. Santos, a new Ph.D. member of CISTER, gave a talk on “Bridging the Vehicular and Urban Internet-of-Things” addressing various works on the topics of vehicular networking, urban sensing platforms, and how these two worlds meet. Pedro started by reporting recent efforts to integrate Vulnerable Road Users (VRUs; e.g., pedestrians, bicycles, scooters) in the vehicular networking ecosystem, discussing specifically propagation modelling, link characterization and user applications for bicycle-to-X links. Moving on to the topic of urban IoT platforms, he shared his contribution to a pioneering deployment of an IoT-supported sensor platform in the city of Porto, and described challenges faced, mechanisms and KPIs developed to operate it, and insightful conclusions drawn from extensive analysis of the collected data. Finally, Pedro reported a characterization of infrastructure-to-vehicle (I2V) links in an urban scenario and subsequent extension to I2V service estimation, and showcased a delay-tolerant strategy to collect the sensor data.

Pedro M. Santos received his B.Sc. and M.Sc. degrees in Electrical and Computer Engineering from the University of Porto in 2009, and the Ph.D. in 2017 in the same field and institution, in collaboration with the Instituto de Telecomunicações (Portuguese R&D institution). Pedro was a Ph.D student and post-doctoral researcher in numerous national (P2020), European (FP7) and international projects (CMU|Portugal program), and a visitor to the Carnegie Mellon University for three months (through the CMU|PT Vital Responder project). He currently holds positions as assistant researcher at CISTER and invited assistant lecturer at the University of Porto. Pedro is a reviewer for numerous forums on communications and networking (IEEE TWC, VNC, VTC, among others) and served or serves as TPC member for IEEE VNC, WCFS and EAI Future5V. His research interests are in wireless propagation, vehicular networking, and Internet-of-Things for smart cities.