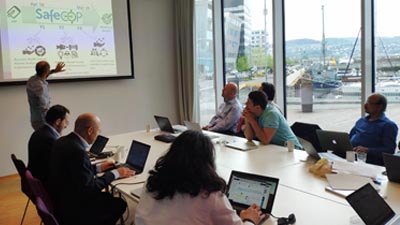 Hosted by our Norwegian partners from SINTEF and Maritime Robotics at the beautiful city of Trondheim in Norway, the final review meeting of the ECSEL project SafeCOP, left an impressing feeling of accomplishment on everyone. Reviewers gave a thumbs up to the work carried out in the project, leaving a quite constructive feedback and an encouraging invitation for a second round of the project in the near future.
During the first day, the consortium presented the final outcome of the six use cases, including a live demonstration of maritime autonomous vessels. During the second day, the technical management team, including CISTER, represented by Ricardo Severino, presented the main conclusions and scientific findings to the reviewers and project officer.
SafeCOP is an European project that targets safe and secure wireless cooperation of cyber-physical systems-of-systems. Particularly focusing on guaranteeing safety in the unpredictability of open environments, the technological advancements in the project enabled a series of use-cases that are pushing forward future autonomous wireless cooperative systems in the healthcare, maritime, and automotive sectors.
CISTER heavily contributed to the project, by leading Work Package 3 and most of its tasks on Safe and Secure Wireless Cooperation for Cyber-Physical Systems, together with a task on Runtime Monitoring for Safety Assurance on Work Package 4, which was dedicated to platform and tool support for safety assurance.

Besides this technical work, CISTER played a major role in the developing of a set of tools for the validation and demonstration of several of the project’s technology bricks. These tools were part of the effort of the cooperative vehicular platooning use-case which CISTER developed together with GMV Skysoft. Greatly impressing the reviewers, the Portuguese use-case demonstrated, in a simulation with hardware-in-the-loop components and via a robotic platooning testbed, several vehicle-to-vehicle enabled cooperative components, in particular a Control Loss Warning module, able to detect vehicle platooning errors and trigger a correspondent safety action. The results from this use-case are presented in the video available in youtube.